The Duluth, South Shore & Atlantic box car, numbered 17065,  series 17000 to 17099, built in 1940 by Pullman Standard Manufacturing Company was added to my equipment roster in 1984  after purchase from the Soo Line Historical & Technical Society (SLH&TS).  This Athearn box car represents a car with an inside height of 10’6” and 5/5 square corner dreadnaught ends. The Athearn box car was painted and accurately lettered for the SLH&TS by Bev-Bel.  Therefore, an upgrade of the car was definitely worth the effort to bring it closer to the prototype. I have reworked this car several times to accomplish this goal.  I have summarized the upgrades below.


The underbody had the following upgrades done.   First, the under-frame and floor were removed from the car.  On the floor the mounts that hold the floor car to the car body were cut-off and replaced with new mounts made from Evergreen, #131, .030x.030" strip styrene on the opposite side.  Moving the mounts to the opposite side allows the interior floor to face the bottom of the car and the weight side to be moved to the interior of the car.  Additional weight was added to bring the car weight to 3.08 oz. and the floor was installed.  The under-frame has the brake components attached to it located in the wrong location so they must be cut-off.  I cut them off, drilled the air reservoir and control valve for piping and reinstalled them in the proper location. I used a Tichy Train Group (Tichy) brake cylinder and cylinder piston with clevis, set #3013, to replace the Athearn one.  Brake levers fabricated from Evergreen #8108 1x8” and #8106 1x6” strip styrene were installed.  Brake lever hangers are Tichy, #3021, 18” straight type, grab irons.  Piping from air reservoir to control valve is Plastruct, #90850, .010” diameter styrene round rod and pipe from brake cylinder to control valve is Tichy, #1106, .0125” dia. phosphor bronze wire (PBW). Brake rodding is Tichy, #1106, .0125” dia. PBW.  Chain is Campbell black 40 links per inch.  Train line was made using .020”floral wire.  Finally, the dirt collector is made with wire and scrap styrene.  Trucks are Athearn ASF A-3 50 Ton provided in the kit with Kadee 33” metal wheels installed.


A roof upgrade started by removing the Athearn running boards, cutting off the mounting lugs and gluing them back into the roof holes.  A longitudinal resin running board from the parts box was installed with extension supports made from Evergreen, #8102, 1x2” strip styrene.  The latitudinal running boards (laterals) are InterMountain plastic laterals narrowed and mounted on support brackets made from Evergreen, #101, .010 x .030” strip styrene.  I now use Detail Associates flat brass with the same dimensions ,which  in my opinion, is easier to work with as it will not break when ends are bent to go over roof sides.  Roof grab irons were made from Tichy, #1106, .0125” PBW with Yarmouth Model Works, YMW #355, eyebolts for corner brackets. 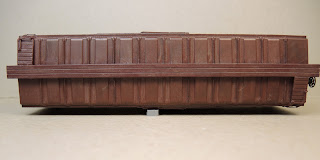 Now I proceeded  with a more difficult upgrade on this car, the sides.   The molded on door guides were cut-off with a fine tooth saw blade mounted in a mandrel in a Dremel Tool.  New door guides were fabricated from Evergreen, #8102, 1x2” strip styrene.  A door stop bent from Detail Associates, #1102, .015" diameter brass wire was installed at the end of the new lower door guide. Doors, cast from resin in the M&N Shops, were installed.  The master used to make rubber mold for the doors was Branchline Trains AAR box car doors with molded on placard boards.   Archer, AR88026, resin 5/8” head diameter rivet heads cast on clear decal film were used to complete the rivet line above the lower door guide.  MicroScale Micro Sol was used to apply the rivets.  Kadee bracket grab irons, #2250, were installed.  Molded on sill steps were cut-off and replaced with A-Line, #29002, style C.  Finally, I carved off the ladder rungs leaving the stiles.  New ladders rungs bent from Tichy, #1100, .010” dia. PBW were installed.

Normally I would have done the “B” work prior to the sides; however, I did not do this upgrade until recently when the needed Klasing brake gear became available.  I began the “B” end upgrade by carving off the molded on ladder rungs, brake rod, retainer line and cut-off the brake step, brake wheel and brake housing.  New ladder rungs bent from Tichy,#1101, .010” dia. PBW were installed.  A retainer line fabricated from Tichy, #1100, .008” dia. PBW was installed. I cut a new brake step out of a Kadee Apex running board and made the brackets from Evergreen, #8102, 1x2” strip styrene.  Since the brake housing and brake wheel need to be Klasing, I replaced the incorrect cut-off  brake gear with Resin Car Works Klasing brake housing and wheel.  A new brake rod was made with Tichy, #1102, .015” dia. PBW attached to a Tichy, #8021, turnbuckle for the clevis to attach it to the Tichy, bell crank, set #3013. 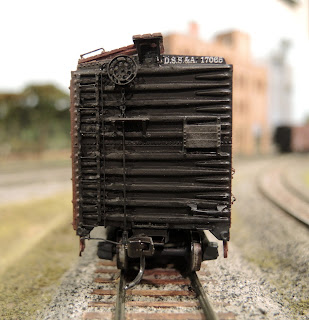 With the upgrades finished, I moved the car to the paint shop.  The underbody I sprayed with solvent based  Floquil Grimy Black, R13, in 1985.  When I added the train line and dirt collector later, I brushed the under body again with Polly Scale, F414140, Tarnished Black.  To match that today, I use Vallejo Model Air, 71.054, grey black.  The ends were brush painted with Polly Scale, F414290, engine black which can be matched using Vallejo Model Color, 70.950, Black.  The added details on sides and roof were brushed with Polly Scale,F414200, Wisconsin Central Maroon, of which I still have half a bottle in the paint drawer, so I did not have to find a Vallejo match.  Car was weathered with Pan Pastels, eye-shadow makeup, and Bradgon weathering powders.

After a recent “B” end upgrade, DSS&A 17065 went back into service on the Minneapolis & Northland Railroad Company.

Thank You for taking time to read my blog.  You can share a comment in the section below if you choose to do so.  Please share the blog link with other model
railroaders.
Lester Breuer
Posted by Lester Breuer at March 09, 2018