Another finished Sunshine Models freight car is ready for service on the Minneapolis & Northland Railroad Company.  The car is a Swift Refrigerator Line, Kit 46.17, numbered 14950. Sunshine Models Prototype Data Sheet, #46B, tells us General American Transportation Corporation, GATX, which had purchased the Swift refrigerator car fleet in 1931, began building these all-steel refrigerator cars in late 1949 with Dart-Not ends and Duryea underframe. On these refrigerator cars the sides have four steel sheets laid horizontally with a pronounced horizontal seam, or overlap, midway up the car side.  A vertical rivet pattern of alternate center rivets tied the side sheet to the internal vetical posts. A special feature of the cars was the brine tank release rod located on the right side on both ends of the car running from the valve on the bottom of the car to the handle at the roof level.  The cars received the red with white lettering paint scheme and were placed in the series 14950, 14960, 14970 with four cars in each.

Since this was a flat kit, I first built the box, the car body,  consisting of the ends and sides with interior bracing cut from Evergreen, #165 .080x.100" strip styrene added. The bracing included a ledge for the floor to sit on.  Next the roof was fitted and installed.  Finally the floor was fitted; however, not glued until the underbody work was finished.

On the underbody I now added the Duryea couple boxes with kadee, #148, "whisker" couplers. I continued the build with the underbody work.  The underbody was built following kit instructions with the following changes.  I added the sill plates made from Evergreen,#9009, .005" sheet styrene with rivets made with RB Productions rivet tool. Brake levers were made from Evergreen, #8108 1x8" and #8106 1x6" strip styrene. A train line, .020" flora wire was installed.  Brake pipes from air reservoir to control valve made using Tichy Train Group (Tichy), #1100, .010" dia. phosphor bronze wire (PBW). Brake cylinder pipe to control vale and all brake rodding was made with Tichy #1106, .0125" dia. PBW.  Tichy trunbuckles, #8021, were used for clevises on the brake rodding. Chain is A-Line, #29219, black 40 links per inch chain.  A dirt collector from Tichy, set #3013, was installed.  The pipe from the dirt collector was connected to the train line with a tee made with MEK Goop (plastic melted in MEK). Tahoe Model Trucks, TMW-006, ARA cast Buckeye with spring plank with InterMountain 33" metal wheels were installed.  Car was weighted to 3.08 oz. and the floor was now glued in place.

I continued the build by adding the kit provided roof details with only a few exceptions.  The Plano latitudinal running board was installed with Formula "560" glue followed by the latitudinal running extension brackets, ice hatches, InterMountain hatch levers, and roof grab irons.  For the roof grab iron corner brackets, I used Yarmouth Model Works, YMW 355, eyebolts. 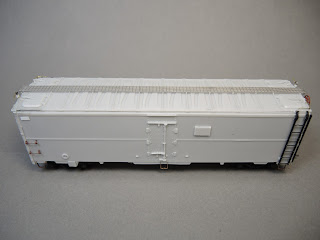 Now to a much more exciting portion of the build, the "B" end. Before adding the "B" end details, I add the side ladders first to allow the end ladder rungs to line up with those on the sides. Once the ladders were installed I added several "B" end items not in the kit. A Precision Scale, #31796, retainer valve and retainer line fabricated from Tichy, #1100, .008" PBW were installed.  Next the kit brake housing with a Kadee, #2030, Ajax brake wheel were installed. Attached to the brake housing, an A-Line, #29219, black chain, 40 links per inch, attached to a brake rod made with Detail Associates, #2505, .015" dia. brass wire with a clevis made using a Tichy, #8021, turnbuckle to allow attachment to the bell crank. Next, uncoupling lever brackets made from Evergreen, #291, .060" angle and uncoupling levers, Tichy, #1106, .0125" dia. PBW were installed. Now the brine tank release tank release rods which I had never installed on a refrigerator car before.  A rod, .019" brass wire, was attached to a kit provided resin valve, drilled to accept the rod, to mount to the bottom of the car.  On the other end a handle I made from scrap sytrene and a brass handle to mount above the edge of the roof.  I made the handle to replace the resin one in the kit as it was I felt too fragile to have on a car on an operating railroad.  I used Detail Associates kit provided eyebolts for brackets to install the brine tank release lever. The brine tank release lever, a really neat feature, provided a new modeling and learning experience. 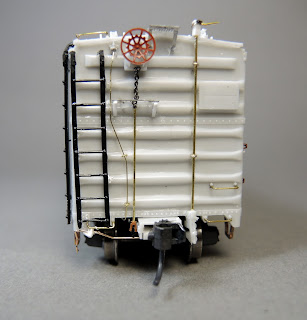 All that I needed to get the car ready for the paint shop was to add the side details.  The plastic kit ladders, already added, were extended to the roof level with MEK Goop to match prototype photo.  Kadee, #2250, bracket grab irons were added.  A trust plate, cut from scarp Evergreen, #9009, .005" sheet styrene was added. Finally, kit sill steps and placard board were installed. 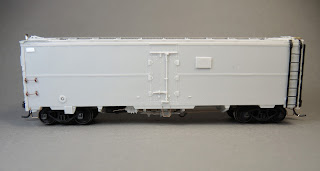 The car was now ready for the M&N paint shop.  In the shop the car had the underbody sprayed Vallejo Model Air, 71.054, Dark Grey Blue. The white fascia strip was painted Vallejo Model Color, #70.951, white.  Tamyia tape, cut to proper width,  was used to cover the white painted fascia strip. Once tape was in place, the car body was sprayed Vallejo Model Color, 70.951, Flat Red. After a few minutes of drying time, aided by a hair dryer,  the tape covering the white fascia strip was removed. The car body was now sprayed with Model Master, 4638, clear gloss acryl to provide a decal base.  The white lettering decals were applied with Micro Set and Micro Sol.  The decals were allowed to dry overnight prior to a sprayed protective coat of Model Master, 4636, flat clear acryl. 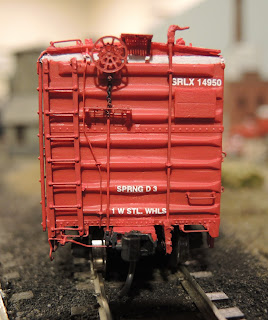 I wish to thank Bob Miller, Ted Culotta, and George Toman for providing references to allow me to gain an education regarding the brine tanks and release lever.  Doug Harding and Nelson Moyer provided photos to aid assembly, painting and especially lettering.


Thank You for taking time to read my blog.  You can share a comment in the section below if you choose to do so.  Please share the blog link with other model railroaders.
Lester Breuer
Posted by Lester Breuer at March 23, 2018