The numbers of both cars are correct for prototype PFE refrigerator cars in series 47203-47702, PFE class R-40-23, built in 1947 for PFE by General American.  Paint, heralds and other lettering data on the cars like the numbers is correct; however; not all lettering that should be on the cars is there. The cars have key features of the prototype including: 3/3 “improved” dreadnaught style ends first used on this car class, round-hole Morton running board and Preco fans.

Additional information regarding the steel prototype PFE R-40-23 cars as high strength steel, additional insulation, service history and photos of sides, ends and roof can be found in Pacific Fruit Express, Second Edition (Signature Press, May, 2003).  Paint and lettering schemes over the years for PFE are summarized in the Appendix.  Another fabulous overview of Pacific Fruit Express painting & lettering by Dick Harley and Anthony W. Thompson with drawings and photos for the various PFE refrigerator classes can be found in the book Southern Pacific Freight Car Painting and Lettering Guide including PFE (Southern Pacific Historical & Technical Society, 2016).

I began the upgrade of both cars by removing the molded non-see thru Morton running board and  brake step on the “B” end followed by cutting off the brake wheel, brake rod between the chain and bell crank and the retaining line.  I carefully opened the draft gear boxes and replaced the couplers with Kadee #148 whisker couplers.  The cars retain their kit Accurail ARA cast steel trucks (not an ASF-3 as sometimes identified) that will be replaced with Kato American Steel Foundries ASF Ride Control  A-3 trucks correct for these cars.

Car 47312 received a Plano Model Products #190, metal running board  and brake step (platform).  The running board was attached with Pacer Formula 560 canopy glue.  I broke the end support brackets while attempting to bend them to shape so I replaced them with brackets made from Evergreen #8102, 1” x 2” strip styrene also used to make the brake step support brackets.

Car 47269 received a Kadee #2005, Morton running board with brackets attached.  I only had to cut off the mounting pins on the running board and on the end brackets with a sprue nipper.  A Plano Model Products brake step (platform) from set #11332 was installed with brackets made from Evergreen #8102, 1” x 2” strip styrene.

Next I replaced “B” end removed brake rod with one cut from Tichy Train Group (Tichy) #1102, .015” diameter phosphor bronze wire (PBW).  The removed retainer line and was replaced with one cut from Tichy #1100, .008” diameter PBW as were the brackets.  I used a photo in the PFE book to locate the retainer line.  A Kadee #2030, Ajax brake wheel was installed.  Uncoupling lever brackets made from Evergreen #291, .060” angle were installed followed by uncoupling levers bent from Tichy # 1101, .010” diameter PBW.

On the sides I removed the incorrectly installed grab irons with a Xacto chisel blade.  I bent wire grabs from Tichy #1101, .010” diameter PBW and located them per side view photos in PFE book.

Next lettering found on the prototype cars; however, missing on these cars was added with decals.  The decal application took more time to complete than adding the details parts.  The various missing side decals: stage icing, bunkers and fans (upper left), safety - cutting torches use due to insulation (lower left under grab iron), “L” and “R” on doors and repack data (above right truck) were applied using Microscale set, PFE 87-414.  Decals were applied using Microscale Micro Set (blue bottle) and Micro Sol (red bottle).  A ownership plate cut from Evergreen .005” sheet styrene was installed in upper right corner.

On the ends white decals showing car features were applied.   The white dot above the “F” in PFE, to designate a car with fans, was made with a white Prisacolor, PC 938, pencil.

Now the decals for the roof hatches were applied.  The stencil/decal for each hatch has the following words, “This hatch cover may be locked from the inside of car.”  Prior to decals application, the areas where the decals were applied were painted Model Master Steel to represent an unpainted roof.  A coat of Future Floor wax was applied to these areas when paint had dried to provide a gloss base for decals.  A good photo of the roof area with hatches showing this stencil can be found on page 176 in the Pacific Fruit Express Book.  I want you to be aware that the diagonal panel roof on this car is not the correct roof.  The correct roof is a Murphy rectangular roof.  The diagonal panel roof was first used on the R-40-25's.  I decided I would accept the incorrect roof for now.  Maybe another upgrade in the future?

When all decals were dry (I normally let them dry overnight) I sprayed the car body with Vallejo Matt Varnish, 70.520 to protect the decals during future handling and provide a base for weathering.  After Matt Varnish was dry, a very light weathering ( PFE washed their Reefers) with Pan Pastels Burnt Sienna #740.5.  PFE refrigerator cars 47269 and 47312 were ready for service on the Minneapolis & Northland Railroad Company, “Serving today, Shaping tomorrow.”  A car card was made for each,  the final step to put the cars in service on the Minneapolis & Northland Railroad Company Railroad.

Thank You for taking time to read my blog.  You can share a comment in the section below if you choose to do so.  Please share the blog link with other model railroaders.

Wire eye bolts can be bent by the modeler.  I bend eye bolts from .010” diameter or smaller brass or phosphor bronze wire with a Xuron #488, wire bending pliers.  I use a Xuron serrated needle nose pliers to close the eye and bend the eye shaft at times.  A Swiss side cutter is used to cut the fabricated eye bolt from the wire used to bend.

Eye bolts can be used for brackets to mount top or bottom mounted couplers.  All you have to do is drill holes with a #79 or # 78 drill and insert the eye bolts. 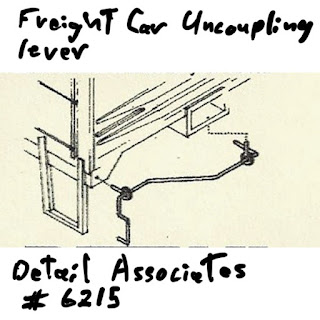 Several of the other prototype type uncoupling lever brackets are commercially available or can be made.

I have tried to use each type I have found and purchased on a freight car to see if I like using them.  Each type is effective.

A “Thank You” to Ed Rethwisch for the photos to help with showing prototype uncoupling lever brackets and for permission to use photos in this blog post.