The Illinois Central Box Car, IC 16203, an Accurail-5th Avenue Car Shops kit, has been in service on the Minneapolis & Northland Railroad Company since 2003. My box car is a stand-in for an IC box car renumbered into series 16000 to 16975 in 1941. A photo of a car in this series is in Steam Era Freight Cars Reference Manual, Volume 1, p. 74. I used this photo as a guide to upgrade this car beyond the wire grab irons I installed in 2003.

In 2003 I carved-off molded on grab irons and replaced them with Detail Associates, #2504, .012” diameter brass wire. Now I continued the current upgrade on the car sides. I carved off the ladder rungs leaving only the ladder stiles. New ladder rungs were fabricated from Tichy Train Group (Tichy), #1106, .0125” diameter phosphor bronze wire (PBW) and installed. Molded on plastic sill steps were cut-off and replaced with A-Line, #29000, style A, metal sill steps. A lower door guide was made using Evergreen, #8102, 1x2” strip styrene and scrap styrene for the door guide supports. On the doors, the door handles were carved off and replaced with ones bent from Detail Associates, #2503, .010” dia. brass wire. Door stops on the model were carved off as they did not exist on the prototype. The final details added were the tow loops on the sill bent from Detail Associates, #2503, .010” dia. brass wire, with Xuron wire bending pliers.


With the sides upgraded, I continued with the roof. I removed the running boards; however, I did not replace them. Instead, I milled them to .020”, to bring them to prototype thickness, using the method Dennis Storzek described in the April 1982 issue of Railroad Model Craftsman and reinstalled them.

Next I upgraded the underbody, which had only the brake components installed in 2003. Brake levers made from Evergreen, #8108 and #8106 strip styrene, were installed. I added the piping from the control valve to the air reservoir using Detail Associates, #2503, .010” dia. brass wire. The pipe from the back of the brake cylinder and all brake rodding was made using Tichy, #1106, .0125” dia. PBW. Clevises on the brake rods are Tichy, #8201, turnbuckles or ones I made using MEK goop (plastic melted in MEK). Chain between the brake cylinder lever and the brake rod is A-Line, #29219, 40 links per inch. Maybe a train line and dirt collector in a future upgrade? Trucks on the car are Accurail ARA cast steel with spring plank with InterMountain 33” metals wheel added.

Since the car had nice lettering and factory paint, the upgraded parts need to be painted to match the existing paint. On the car body, I was able to do that with Vallejo Model Color using a mix of two parts Black Red, 70.859, and one part Flat Yellow, 70.953. On the underbody I used Vallejo Black Grey, 70.862. The trucks were brush painted in 2003 with a Floquil mix: four parts Grimy Black, one part Reefer White, and one part Rust. I did all the painting using a brush. The car was weathered with Pan Pastels and a few chalk marks were added with a white Prismacolor pencil, PC938.


After the car upgrade, the car is back in service on the Minneapolis & Northland Railroad Company. Currently, it is an acceptable stand-in because the ends are 4 and 4 rather than the three and five corrugations as the prototype had. If I find ends with the correct corrugations I will finally complete this upgrade.


Thank You for taking time to read my blog. You can share a comment in the section below if you choose to do so. Please share the blog link with other model railroaders.
Lester Breuer
Posted by Lester Breuer at February 09, 2018 2 comments:

I have built Westerfield Models Fruit Growers Express Company, F.G.E.X., R7-class ventilated refrigerator, kit 11661.  I wanted to add this car to my freight car fleet because of the Warren truss design and Hutchins Dry Lading Roof features. The kit instructions have a history of these cars built by the Pennsylvania Railroad, PRR, in their Altoona Shops or for the PRR by American Car & Foundry and later leased to F.G.E.X. and placed into the 43500-46350 car series.  Patrick C. Wider has a very complete article with excellent photos in Railway Prototype Cyclopedia, Vol. 15 on these cars.  After reading the Wider article and reviewing the article photos I decided to number the car 46244, in F.G.E.X. 45645 to 46270 series, built by AC&F in December 1913 to January 1914.  I used a nice photo of F.G.E.X. 46232, which appears on page 75 and a “B” end photo on page 71, in the Wider article, as a guide to build this car.

I began the build of this one piece body kit by installing the roof and fitting the floor.  To the roof, I attached the running board with barge cement.  I continued the build installing the kit coupler boxes with Kadee No. 146 long shank couplers installed.  Since I have my railroad set in spring 1955 and F.G.E.X. reefers had original trucks replaced in later years, I used Accurail ARA cast steel with spring plank trucks with a modified spring assembly and with InterMountain 33” metal wheels.  These trucks may be replaced later with Bowser trucks based on suggestions I received on STMFC website from Andrew Dahm, Ben Hom and Dave Parker.

Next I began work on the “B” end.   I installed the running board brackets fabricated from .005” strip brass stock.  I added the brackets to the “A” end as well.  I attached Tichy Train Group (Tichy) brake step from set #3013 after cutting a small notch for the retainer line.  Brake step supports are made from Evergreen, #8102, 1x2” strip styrene.  I added the retainer line made using Tichy, #1100, .008” dia. phosphor bronze wire with brackets made with MEK goop (scrap plastic melted in MEK).  A brake shaft step was made with A-Line, #29000, sill step.  Now I could add the brake shaft, Detail Associates, #2505, .015” dia. brass wire with a Kadee, No.440, 18” brake wheel installed.  Next, I installed all grab irons on this end and “A” end.  Finally, Yarmouth Model Works, YMW #400, Carmer etched brass uncoupling levers were installed.


I now turned to details on sides starting with the ladders.  I did not want to use or assemble the fragile resin cast ladders so I replaced them with Branchline Trains BluePrint parts, #100015 box car details set (no longer available).  These ladders matched the rung spacing  on the resin ladders perfectly.  I cut the seven rung ladders off to have six rung ladders for the sides and five rung ladders for the ends.  If I had not had these Branchline Trains ladders in my parts box, I would have used Yarmouth Model Works metal ladders which can be purchased with this rung spacing.  With ladders installed on sides and ends, I installed the A-Line, #29000, style A, sill steps.  The sill step hanging brackets portion were made with Evergreen .005” strip styrene with rivets added using a RB Productions rivet tool.  Next, I installed the grab irons.  A second grab iron was added on the left end of the side along with nut-bolt-washer castings.  Fascia letter boards and the jacking pads were installed to finish the sides.

I returned to the roof to add the remaining details.  I added the ice hatches followed by the roof grab irons.  The corner brackets for the grab irons are Yarmouth Model Works, YMW 355, eyebolts.  Now I fabricated the ice hatch rests using .005" brass for the base and Evergreen strip styrene for the vertical portion with the notch.  Bill Welch provided photo help as did his article in Prototype Railroad Modeling, Vol. 1, published by Speedwitch Media in 2005.  I only had the underbody work left to finish the car. 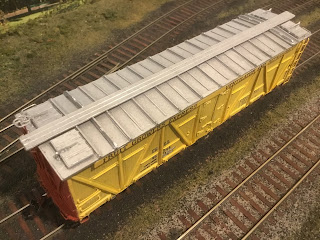 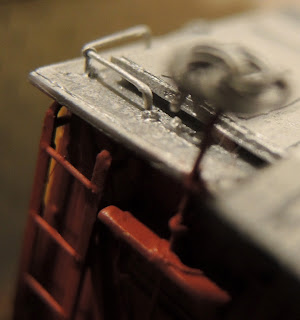 I did not begin the underbody by gluing the sill flanges in place first as the instructions state.  I saved the flanges for my last step as I felt it was easier to complete all the other underbody work before doing so.  I began the underbody detailing by installing the kit supplied brake components.  The mounting brackets for the air reservoir are plastic sill steps, from the scrap box, cut-off cars that had A-Line sill steps installed. Piping from air reservoir to control valve is Tichy, #1101, .010” dia. phosphor bronze wire (PBW) and the pipe from brake cylinder is Tichy, #1106, .0125” dia. PBW as is all the roddding.   The clevises on the rodding were made with MEK goop.  The chain is A-Line, #29219, black forty links per inch.  I also added a dirt collector from Tichy, set #3013. Next, kit provided drains were installed.  Finally, the sill flanges were glued in place.  I want to thank Bruce F. Smith for providing a drawing of the PRR AB brake system that replaced the original K system allowing a correct and easier brake system install.  In addition, I want to thank Rich Orr, Dennis Storzek and Ted Culotta for providing information helping me with the underbody details.

Now the completed car was moved to the paint shop. The four color paint job was more difficult and took more time due to the taping required. The underbody was sprayed Vallejo black grey (tarnished black), 70.862, the sides Vallejo golden yellow, 70.948, the ends brown RLM 26, 71105, and roof Vallejo aluminum, 71.062.  Once all paint was dry a Model Master Gloss Clear Acryl, 4638, was applied for decal base.  Decals supplied in the kit were applied with MicroScale Set and Sol using above mentioned photos.  Once decals were dry, car body was sprayed with Model Master Flat Clear Acryl, 4636, to protect decals and paint. 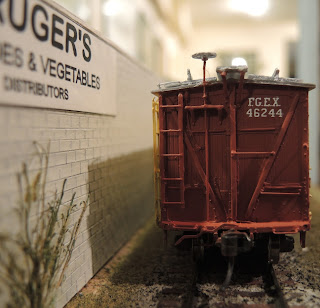 Thank You for taking time to read my blog.  You can share a comment in the section below if you choose to do so.  Please share the blog link with other model railroaders.
Lester Breuer
Posted by Lester Breuer at February 02, 2018 2 comments: