Since I model spring 1955 I have a coal facility located in the town of Little Chicago on my Minneapolis & Northland Railroad Company.  I always felt I should also have small tank facility as the one I modeled which I saw in many small towns during railfan trips.

This past winter I started to look for an area that might hold a small tank facility in Little Chicago on my railroad.  At first I thought land (a space) was not available; however, one day the “light bulb” went on.   I could see a location.  An area, 5 x 6 inches, between the stock pens and backdrop that would work.

First the few trees and bushes on the sight were moved to new locations on the railroad.  The ground was scraped, painted with a tan latex paint I like to use under ground cover and a fine sifted common sand from a local road was shifted with a a tea strainer over brushed on white glue.  The tanks were added next.

The tanks were cut from old Roundhouse tank car kits I have had in freight car inventory since 1982.  The tanks were in inventory as too modern for the railroad.  And, maybe the lettering?  The lettering on the tank cars was removed by light sanding with fine grit sandpaper.  After sanding the tanks were wiped down with isopropyl alcohol to remove all residue.

The details added to tanks came next.  I added Walthers ladders and Williams Brothers (I believe no longer available) pipes and valves.  Walthers piping (available) would work as well.

Standpipes for unloading tank cars were needed at the facility.   Photos of appropriate standpipes for unloading tank cars a this type facility were received from friends.   In addition to photos, plans from a May 1997 RailModel Journal were provided to aid in the build.   Standpipes (prototype I measured 2 1/2 inches in diameter) were built with Williams Brothers piping and fittings.  A piece of scribed balsa wood was used for the base.  The scribing represents the boards used to form the cement base.

The final items needed to finish the facility were a pump house and truck loading platform.  I used measurements I took of these structures at small three tank facility in Buffalo, Minnesota in the early 1970s to build these structures.  The facility is no longer in existence.

I built the pump house (prototype 8 x 10 ft. x 8 ft. high with door 3 feet wide 7 feet tall) using parts from my box of left over kit parts.  The rounded corrugated roof had a prototype distance of 1 foot 5 inches at it high center point above the door. 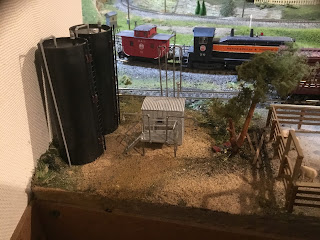 During railfan trips most of the small tank facilities I visited had the tanks painted white.   Therefore, I painted the tanks in my new tank facility an enamel white using a rattle can.

I felt a tank sign was needed to identify the tank facility.  A search of 1955 signs on the internet produced a Mobile sign I liked.   A print screen, and image crop with Photoshop Elements produced a sign ready for sizing.  I asked a friend to down size my image to a HO scale 5 feet wide sign which he did.   I printed the digital Mobile image on white letter computer paper, cut it out, and applied it to the entrance tank with Elmers white glue.

Now all I have left to do is create tank car movements in my card system to the new tank facility for operating sessions.