Union Refrigerator Transit Lines wood refrigerator car, URTX 7567, assigned to series 7000-7699, was built in 1927 by American Car & Foundry and leased to The Milwaukee Road.  A photo of URTX 7579 appears on page 151, in Steam Era Freight Cars Reference Manual, Volume Three: Refrigerator Cars, published by Speedwitch Media in 2017. I used this photo as a guide for my build and upgrade of this plastic kit purchased from 5th Avenue Car Shops  who had Accurail  produce the car using their 4800 series wood refrigerator.  The car was painted and lettered except for car numbers which have to be applied by the modeler  using decals provided in the kit.

I began the assembly and upgrade of this car on the underbody by installing the brake components after drilling them with a #79 drill for piping  to be added later.  The kit provides plastic pins to attach the trucks and molded on pins on coupler pocket covers to attach them to coupler pockets.  I use neither.  I cut the molded on pins from the back of the coupler pocket covers and use the remaining spot to drill and tap a 2-56 hole for mounting with screws.  Next the truck bolster kingpins were drilled and tapped for 2-56 screws.  Kadee #148 “whisker” couplers were installed in the coupler pockets and Accurail #150, 2-56x3/16” screws were used to attach the covers.  The Accurail trucks after slight modification, including removing the brake shoes, were installed with Athearn #99002, 2-56x1/4” round head screws.  Next the kit provided car weight was attached with Permatex adhesive sealant clear RTV Silicone which weighted the car to 4 ounces.  With these tasks complete, I glued the underbody to the car body.

I now turned my attention to the car body details.  The first upgrade step was to carve off all the car molded on grab irons to be later replaced with wire ones.  I followed this step by carving off all ladder rungs leaving only the ladder side rails.  The carving was done with a Xacto number 5 handle with a number 17 Xacto blade ground to the shape  I like for carving off molded on details.  If you do not want to grind a blade, you could use a number 17 blade with only the corners rounded to prevent gouging; however, I believe a much better solution is to buy the micro knife handle #81067 and surgical blades #61, #81084 and #62, #81085 from MicroMark.  I use these micro handles and blades to do final cleanup of carved off areas after using the Xacto blade.

After the grab irons and ladder rungs were carved off, the areas were brush painted using Vallejo Model Color Light Orange #70.911 for the sides and Mahogany Brown #70.486 for ends and roof.  Both colors are an excellent match for the original paint used by Accurail. While the car was set aside for the paint to dry, the running board was milled thinner, from .040” to .025”, using a Dennis Storzek technique described in his article, “5 boxcar improvements”, in April 1982, Railroad Model Craftsman, on page 84.  Once milling was complete edges were touched up with the Vallejo Mahogany Brown.  Of course, there are others options for a scale running board such as scratch-building one from scale lumber or purchasing a laser cut  one.

The “B” end upgrade was next.  I began by cutting off the molded on bulge on the bottom of the brake step off.  Brake step support brackets, Tichy brackets from set #3013, were installed.  A Sunshine Models resin retainer valve from the parts box was installed followed  by installing a retainer line and bracket made with Tichy #1100, .008” diameter PBW.   The brake  shaft step is molded with a filled in center rather than being open as it should be. To create an open brake shaft step  I drilled the center of the step with a 2-56 drill and finished forming the opening with a broach and file.  Maybe cutting it off and replacing it with a A-Line #29000, sill ( stirrup) step would have been easier.    A brake shaft, Tichy #1102, .015” diameter PBW, substituted for the .020” diameter kit provided brake shaft, was installed.  The brake shaft  had a Tichy brake wheel, set #3013, mounted on it replacing the thicker kit provided one.  A number #76 drill was used to drill a hole for brake shaft to go through in the lower portion of the brake shaft step prior to install. A brake shaft bracket was made with Tichy #1101,  .010” diameter PBW and installed.  Uncoupling levers bent from Tichy #1106, .0125” diameter PBW were installed with eyebolts I bent from  .010” diameter brass wire ( for bending technique see uncoupling levers under labels on this blog).  Again all new parts installed were painted with Vallejo Mahogany Brown.

With car body details added, I added underbody details.  Piping from air reservoir to control valve, Tichy #1101, .010” diameter PBW and  pipe from back of brake cylinder to control valve, Tichy #1106, .0125” diameter PBW wire were installed. Next a train line using 26 gauge, .018” diameter, floral wire was installed with couplings made with MEK Goop.  The train line holes were drilled in bolsters and cross ties with a 4” drill made from .032” diameter piano wire.  A dirt collector, Tichy Set #3013, was now installed connecting its molded on pipe to the train line with a connecting tee made from MEK Goop.  Brake levers made from Evergreen #8108, 1x8” and #8106, 1x6” strip styrene were installed. Brake rodding, Tichy #1106, .0125” diameter PBW was connected to brake levers with half a Tichy #8021, turnbuckle.   Chain between brake cylinder and rod is A-Line #29219, 40 links per inch.  Underbody added details were painted Vallejo Model Color #70.862, Black Grey.


The final details added were the ice bunker drains.  The drains,  bent from .040” diameter 24 gauge floral wire, were installed and painted Mahogany Brown.

Upgrade was now complete except for decals.  Time to add numbers to car sides and  reporting marks and numbers to ends with decals in kit.  First,  Model Master 4638, Clear Gloss Acryl  was applied to area were decals were to be applied.  Once  dry, decals were applied using MicroScale MicroSol.  Decals were allowed to dry overnight before I sprayed the entire car body with Model Master 4636 Flat Clear Acryl rather than just coating the applied decal areas. 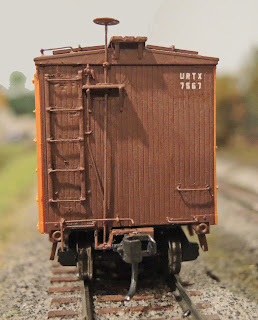 Uncoupling Levers - Bending your own

When I decided I was going to bend uncoupling levers for my freight car models I felt I needed some basic information about the uncoupling lever to accomplish the task. I began my information search with the definition. The uncoupling lever or uncoupling rod (also called a cut lever) definition in the Dictionary Of Car Terms, in the 1949-1951 Car Builders’Cyclopedia published by Simmons-Boardman Publishing Corporation, “a rod with a bent handle forming a lever, usually attached to the end sill, by which the lock of the automatic coupler is opened and the cars uncoupled without going between them. The lever proper is the part attached to the rod and operating the unlocking mechanism, but in the case of freight cars the lever and rod are generally made in one piece.” The definition has remainder unchanged since the 1922 Car Builders’ Cyclopedia with the exception of the word “iron” in front of the word “rod” being omitted.

The definition is not enough to begin bending an uncoupling lever as it does not provide the dimensions or mounting location data. For that data I had to look in the safety appliances: A.A.R. Standards section of the 1949-1951 Car Builders’ Cyclopedia. Here I found two uncoupling levers are required. The handle, of an approved design, shall not be more than twelve (12) inches nor less than nine (9) inches from the sides of the car. Ends of the handles shall extend not less than four (4) inches below the end sill, or shall be so constructed as to give a minimum clearance of two (2) inches around the handle. Minimum drop of the handles shall be twelve (12) inches; maximum, fifteen (15) inches over all.

I still needed to know what handles, of an approved design, were used. I found the following photos in the 1941-1951 and 1953 Car Builders’ Cyclopedias in the Standard section and the Couplers And Draft section.  The photos show the two basic rod types of uncoupling levers: top or bottom.


Once you have a diagram, choose the wire size you wish to use for the uncoupling lever. I prefer .012” Detail Associates brass wire, #2504, or .0125” Tichy Train Group phosphor bronze wire, #1106. You will also need a needle nose plier to use to make the bends in the wire to form the uncoupling lever.

Once you have two uncoupling levers bent you are ready to attach them to your freight car. You will need uncoupling lever brackets to do so. In a resin kit the uncoupling lever brackets may be cast in resin that you have to cut out of a resin cast parts sheet and attach to the car. I have found these break easily and no longer use them. I use eyebolts made by Detail Associates, #2206, or etched brass ones from Yarmouth Model Works, with or without shoulder or eyebolts I bend myself for brackets.  Another bracket type I use when mounting bottom type uncoupling levers is an etched bracket made by Yarmouth Model Works, #507, you cut out of an etched brass fret and bend into shape for mounting.  Yet one more bracket I use is one scratch-built from an Evergreen, #291, .060 styrene angle.  The latter two type brackets are used with bottom mounted couplers on the left side of the freight car and the right angle bend at point D on uncoupling lever is inserted into a hole drilled in the coupler box.  You will have to decide which of these brackets or other brackets of your choice to attach the uncoupling lever to your freight car.

Thank You for taking time to read my blog. You can share a comment in the section below if you choose to do so. Please share the blog link with other model railroaders.
Lester Breuer
Posted by Lester Breuer at September 14, 2018 No comments: