I have completed a Westerfield resin kit, number 2501, a Milwaukee Road composite gondola with four drop doors which I numbered 307682.  The number places the car in series 305625-308624, an order of 3,000 cars built for the Milwaukee Road by Bettendorf Company in May 1923   The excellent Westerfield kit instructions provide a history of the car which states the railroad based its design on the USRA car but made significant changes in the kinds of bracing used.  A bibliography describes sources of plans and photos: the 1925 Car Builders Cyclopedia reprinted in Train Shed Cyclopedia No. 62 and contemporary photos in the July 1940 issue of Model Railroader.  One additional source I found not listed in the bibliography is The Milwaukee Railroad Freight Cars published by Normandie House.  It contains the official employees' shop diagrams (tracings of the original blue prints) of in-service Freight Cars and Cabooses in 1937.

Before starting the build, the nice one piece gondola body, which makes for an easier resin build, was washed with Dawn dishwashing soap to remove mold release agent.  I began the build with the underframe adding Kadee #262 coupler boxes with Kadee #148 "whisker" couplers installed.  The kit provided Tichy Train Group "K” brake system was installed.  I substituted .018" diameter floral wire for the train line. I made the brakes levers from Evergreen, #8106, 1x6" and #8108, 1x8" strip styrene.  Clevises used on the brake rodding are half of a Tichy Train Group, #8021, turnbuckle.  Chain used was A-Line, #29219, 40 links per inch. Accurail ARA cast steel with spring plank with InterMountain 33" metal wheels were used for the Bettendorf trucks called for in the employees' shop diagrams.

Once the underframe was complete, I installed the interior car weight, fitted the floor that covers it and added the interior gussets.  I substituted two .040" thick pieces of sheet lead for the interior supplied weight to make the car weigh 3.8 ounces. Next I completed the "B" end.  I made the retainer line with Tichy Train Group, #1100, .008" dia. phosphor bronze wire (PBW).  I made a brake shaft step with plastic sill steps found in my scrap box that had been cut-off some plastic car.  A brake shaft bracket, located below the top flange, was made from Tichy .008" dia., PBW.  Uncoupling levers were fabricated from Tichy, # 1106, .0125" dia., PBW. 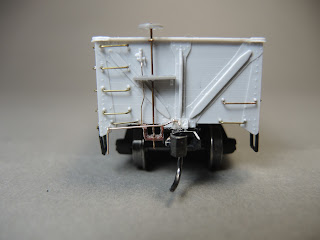 With the "B" end fininished I added the remaining details such as grab irons, sill steps, and wine door locks to the rest of the car exterior.  Next I washed the car body with a makeup cotton swab dipped in 91percent isopropyl alcohol to remove any remaining traces of mold release and assembly grime. The car was now ready for the paint shop.

The painting is pretty simple as only one color, Mineral red, is needed for the car body, underframe and truck side frames.   The Mineral red paint  I used to spray the car was a mix of two parts Vallejo Model Air Black Red, # 70.859, and one part Vallejo Model Air Flat Yellow, #70.953, thinned with a thinner consisting of distilled water, Vallejo Airbrush Thinner, and Vallejo Airbrush Flow Improver. Once paint was dry, I sprayed the car with Model Master, #4638, gloss clear Acryl for a decal base.  A nice decal set in the kit was used to apply the 1930's lettering scheme using the side and "A" end photo views in the July 1940 isssue of Model Railroader.  Microscale Micro Set and Micro Sol were used to set the decals.  After decals dried overnight, I sprayed the car with Model Master clear flat. 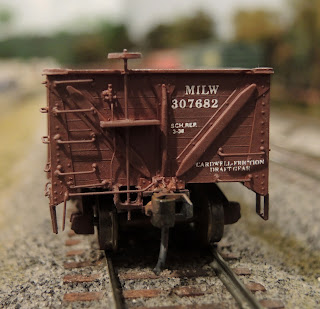 I scratchbuilt MILW composite gondola 308620 in 2006 using the plans and photos in the sources stated above.  The scratch build was done with plain styrene scribed with 9 and 12 inch wide boards for sides and ends, Evergreen V-groove siding for the floor and underframe and many sizes of Evergreen strip styrene combined for braces and other parts. All rivets were hand made using a dressmaker’s pin chucked in a pin vise. The under body received a Cal-Scale, #190-283, AB brake system with piping and rodding made with various Detail Associates brass wire sizes. In the paint shop, I sprayed this car with Floquil Boxcar Red and then Floquil Glaze to provide a good decal base. Champ decals sets were used for lettering.  As soon as the decals were dry I sprayed the car with Floquil Flat Finish.  Finally, the car weathering was applied using eyeshadow makeup and Bradgon weathering powders. 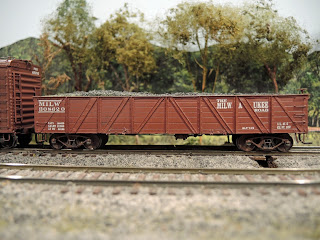 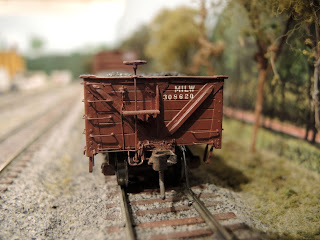 I have finished the 2017 RPM Chicagoland Chicago Great Western box car mini-kit.  I lettered the box car 92048 which was built for the CGW in September 1945, series 92000-92149, by Pullman-Standard.  The special feature of this box car was the proprietary Pullman-Standard "Carbuilder" corrugated round corner ends which consisted of a 4-5 arrangement of thick corrugations with sharp points at each end. Other features of the box car were 7 panel Superior doors, Murphy raised panel roof, Equipco hand brakes, wood running boards and steel plate brake steps.  Trucks were double truss 50 ton trucks, plankless springs, and a center leaf spring in the coil spring pack.  The features I have listed here were provided by Ed Hawkins and printed in the RPM Chicagoland booklet. 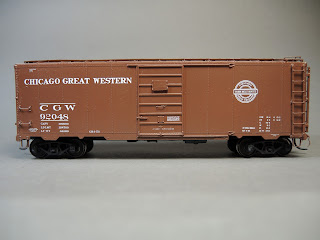 The kit consisted of a 1937 AAR box car body provided by Des Plaines Hobbies, resin castings of the"carbuilders" ends and other resin castings done by Aaron Gjermundson, from Frank Hodina's masters reworked from rapidprototype prints for which Jason Kiewer drafted the digital model. Decals were provided by Speedwitch Media.

I began the build with the car body by cutting the ends off the 1937 car body with an UMM saw and attaching the resin cast "carbuilder" ends.  The sill tab under door extended to bottom door stop per prototype photo using Evergreen #8206 2x6" strip styrene.  I now fitted the underframe to be detailed later and added weights to the interior floor to bring the car weight to 3.8 ounces.  Sill steps were cut off and replaced with A-Line #2900, style A, sill steps.   Kadee #2250 bracket grab irons and other grab irons fabricated from Tichy Train Group #1106 .0125" phosphor bronze wire were installed. The roof grab irons used Yarmouth Models, YMW 356 eye bolts, for corner brackets.  For the latitudinal running board braces I used Yarmouth Model Works, YMW #20, running board braces.  Other kit supplied parts completed the car body except for the "B" end. 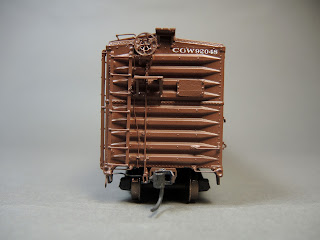 On the "B" end a Kadee #2041 Equipco brake wheel, a steel brake step made from .005" sheet brass and retainer line and bracket fabricated from Tichy Train Group #1100 .008" phosphor bronze wire were installed.

With the car body finished I began detailing the  under body. 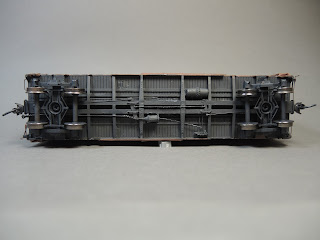 On the underframe I cut off existing molded on mounting brackets and  plugged  all the holes with kit spruces.  I installed  the resin cast brake components followed by the brake levers  made from Evergreen 1x6" and 1x8" strip styrene.  Piping and rodding is Tichy Train Group phosphor bronze wire: air reservoir to control valve is Tichy #1101 .010" dia. and brake rodding is Tichy #1106 .0125" diameter.  Clevises on the brake roddding are Tichy #8021 turnbuckles.  Chain is A-Line #29291 40 links per inch.  Train line is made from .019" diameter floral wire. Kadee #262 coupler pockets with Kadee #148 "whisker" couplers and Tahoe Model Works coil-elliptic 50-ton trucks installed.  Finally, uncoupling levers fabricated from Tichy .0125" phosphor bronze wire installed. The car now moved to the paint shop.

The finished car is now in service on my Minneapolis & Northland Railroad Company to be enjoyed for years to come.