I have added another freight car to my fleet, the build this time a Duluth, South Shore And Atlantic Box Car, DSS&A 17077, series 17000 to 17099, built in 1940  by Pullman-Standard.  The car is 10’ 6” in height with 5/5 square-corner ends.  Resin Car Works (RCW) offered this kit, 3.02, and one for the Soo Line which also owned cars with this design.  Photos for the build are in the “Prototype Data and Modeling Notes” provided in the kit.  I call this a composite kit rather than a resin kit as the kit contents include an InterMountain 1937 AAR plastic body with false ends, resin ends, and other plastic and resin parts.  If you think you may have previously read some of the details that follow for the build of DSS&A 17077, it may be the case, as I built the Soo Line Car kit and described the build with photos on the RCW blog.

I begin each build by assembling the car body box, made up of the sides and ends, if needed and fit the roof and under-frame.  This kit contains an InterMountain molded car body box with sides and false ends. Therefore, I began the build by installing the under-frame. I continued the build by fitting the InterMountain car body box with the supplied Red Caboose roof rather than the InterMountain roof, also in the kit.  To accomplish this task, you have to cut a notch out of each body false end  to fit the Red Caboose roof.  I cut the notch with a fine toothed saw blade mounted in a Dremel tool and fitted the roof; however, I did not glue it yet.  Next, I installed the resin square-corner ends over the false ends making sure to align the top with the roof eaves and the bottom with the couple pads on the under-frame.  I now went back to the under-frame to install Accurail trucks with InterMountain 33” metal wheels and Kadee #262 coupler boxes with Kadee #148 “whisker” couplers. Finally, I removed the roof, added weight to bring the car weight to 3.8 oz., reinstalled and glued the roof in place. The car body was now ready for adding detail.


I began the detail of the car body by installing the side ladders followed by the end ladders. I install the side ladders first as the end ladder rungs should line up with those on the sides or be within 2 inches as on the prototype.  Once I have the end ladders installed I proceed with the remaining "B" end details. In this kit build, I replaced many of the plastic parts in the kit. On the "B" these included, the brake step, a Plano Model Products,#11322, a Cal-Scale bell crank, set 190-283, Precision Scale retainer valve, #31796, retainer line made with Tichy Train Group (Tichy), #1100, .008" dia. phosphor bronze wire (PBW), chain from brake housing, A-Line, #29219, black 40 links per inch attached to the brake rod made from Tichy, #1102, .015" dia. PBW attached to the bell crank with a Tichy, #8021 turnbuckle, bracket grab iron is a Kadee, #2250 and the sill grab irons are fabricated from Tichy #1106, .0125" dia. PBW. Uncoupling levers are fabricated from Tichy, #1106, .0125" PBW.  The fine looking Klasing etched brake wheel and cast housing provided in the kit are produced by True Line Trains. 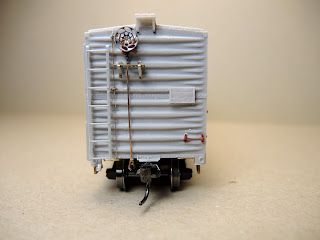 Following the "B" end I add the details on the sides and the "A" end.  Again I replaced kit parts as follows: bracket grab irons, Kadee, #2250, sill steps, A-Line, style C, #29002, and door handles are made from Detail Associate .010" dia. brass wire. Placard board fasteners were made with MEK Goop (plastic melted in MEK). 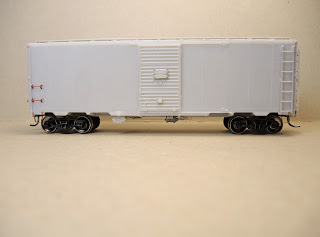 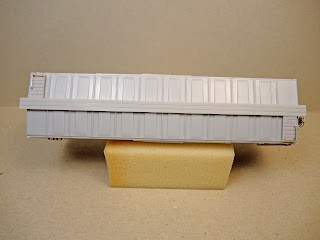 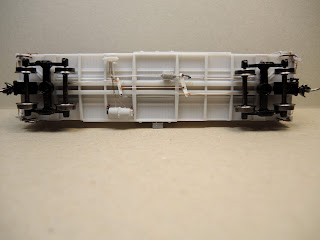 Once underbody work was complete, I moved the car to the paint shop.  First, the car was washed with a cotton makeup swab dipped in isopropyl 91% alcohol to get rid of any grime picked up during the assembly work.  When dry, the underbody was sprayed Vallejo Model Air Dark Grey Blue, #71.054 (Tarnished Black).  Car body sides were taped with 3M blue painter's tape to avoid overspray from the ends, I sprayed Polly Scale, #F414290, Engine Black.  After ends dried, they were taped with Tamyia and 3M blue painter's tape to protect the black ends from the Vallejo Model Color mix: Black Red, #70.859, 2 parts and Flat yellow, #70.953, I used to spray the sides and roof. Again when dry, I sprayed the  car body with Model Master, #4638, Gloss Clear Acryl, for a decal base.  Decals provided in the kit were applied with Micoscale Set and Sol.  After decals were left to dry overnight, I sprayed the car body with Model Master, 4636, Flat Clear acryl to protect the decals. 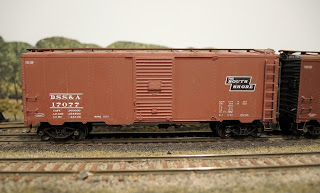 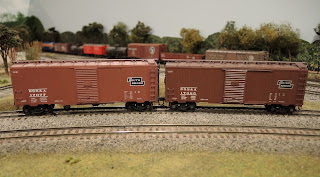 The car went into service on the Minneapolis & Northland Railroad Company after leaving the paint shop.  The car joined DSS&A box car 10765, an Athearn box car, painted by Bev-Bel, issued by the Soo Line Historical and Technical Society in 1982. I have reworked the Athearn car adding some of the details added on the RCW 17077box car. 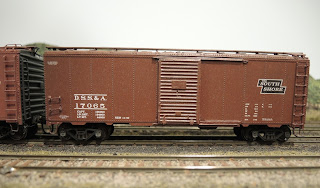 Thank You for taking time to read my blog.  You can share a comment in the section below if you choose to do so.  Please share the blog link with other model railroaders.
Lester Breuer
Posted by Lester Breuer at March 03, 2018