I pulled from my to build kits, Milwaukee Road, single- sheathed box car, Sunshine Models, kit 47.3, number 711470, series 711000 to 711999, for this build.  The prototype information and photos of this car are in the Prototype Data Sheet #47A provided in the kit which contains the only good  photo of the “B” end I could find, Steam Era Freight Cars Reference Manual, Vol.1, pages 70 and 71, and several color photos are in the Milwaukee Road Color Guide, Vol. 2, page 7.  A diagram of the car is in The Milwaukee Road Freight Cars–Official Employees’ Shop Diagrams for 1937 book, p. 16.


I began the build of this flat kit by gluing an end to a side to create a “L” and repeated the process for the other end and side.  The two “L” units are glued together to create the basic box.   The underbody was now cemented in place.   Car body inside corners and sides were reinforced with Evergreen #164 .080” x .080” strip styrene. Next I attached Kadee #262 coupler pockets with super glue to hold them for drilling.  Now the coupler pockets and bolsters were drilled for 2-56 screws.  I like to complete this step before adding weight to the interior of the car body so I do not cover the holes with weights, in this case electrical outlet box punch-outs, used to weight the car to 3.8 ounces.  With the weights in place I cut a baffle from Evergreen .040” sheet styrene and installed it in the center of the car body to prevent sides from bowing in.  Hutchins all steel roof resin casting was now installed to complete the car body.

I turned back to the underbody to install Kadee #148 “whisker” couplers and Tahoe Model Works, TMW-006, Buckeye ARA trucks with InterMountain 33” metal wheel sets with 2-56 screws. Underbody work was now completed per the kit instructions with the following changes.   I used Detail Associates #2503 .010” brass wire for the piping from the air reservoir to the control valve and Tichy Train Group #1106 .0125” dia. phosphor bronze wire for the pipe from the back of the brake cylinder to the control valve. Tichy Train Group #1106 .0125” phosphor bronze wire was used to make the brake rods which were attached to brake levers with clevises made by cutting Tichy Train Group # 8021 turnbuckles in half.  The chain between the brake cylinder lever and brake rod is Campbell 42 links per inch black chain.  A train line fabricated from Plastruct #90851 .020” dia. styrene round rod installed. 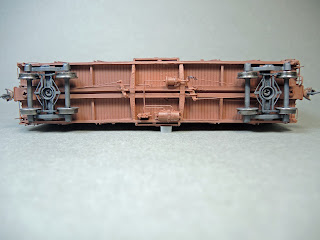 With underbody complete I now began the detailing of the "B" end.   As with the underbody I did make changes from the kit instructions. The longitudinal running board extension brackets, seen on the "B" end, were made from Evergreen #8102 1” x 2” strip styrene with fasteners made with MEK “Goop” (styrene plastic melted in MEK).  On the “B” end the brake shaft step was fabricated using an A-Line #29000 sill step shaped per prototype photo.  To install the A-Line brake shaft step the top mounting pins were bent back ninety degrees and then half of that bend was again bent back up ninety degrees which when installed moved the brake shaft step forward from the underbody to enable to brake shaft, .015” brass wire, upon install to rest on it.  To complete the brake shaft step to look like the prototype in photos, additional parts of the brake shaft step such as the angle brace from the side to the underbody were made using Evergreen strip styrene.  A Precision Scale #31796 retainer valve was used and a retainer line fabricated from Tichy Train Group # 1100, .008” dia. phosphor bronze wire was installed.  A bracket for the brake shaft was made using the kit provided shim brass.  The uncoupling lever brackets were made by cutting one of the spare resin mounting “L” brackets in half and attaching it to the underbody under the left side of the end ladder.  Yarmouth Model Works #355 eyebolts were installed in the resin “L” bracket to complete the uncoupling lever bracket. The uncoupling levers were bent from Tichy Train Group # 1106 .0125” dia. phosphor bronze wire and installed in the fabricated resin mounting brackets and the Detail Associates #2206 eyebolts provided in the kit for the mounting brackets above the coupler pocket. 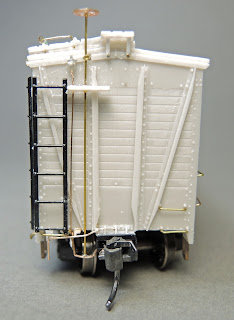 On the car body sides the grab irons for the left side in the kit were not the correct length so new left side grab irons were bent from Tichy Train Group # 1106 .0125” phosphor bronze wire and installed.  The car body detailing  was now complete.

With car body complete the car was now moved to the paint shop for paint and lettering .  First, car body and underbody were washed with an all-cotton cosmetic applicator dipped in 99% isopropyl alcohol prior to being sprayed with PollyScale Box Car Red, F414281.  After drying, car body was sprayed with Model Master 4638 Gloss Clear Acryl for decal base.  The paint  and gloss for spraying were thinned, 2 parts paint 1 part thinner,  with a custom mix thinner of distilled water, Vallejo Airbrush thinner and airbrush flow improver mixed per formula found in Guide to Acrylic Painting by Joe Fugate.  Paint was sprayed with a Paasche Talon airbrush at 28 psi.  Decals by Rail Graphics provided in kit were applied using Micoscale Micro Sol.  Photos in various sources were used to position lettering.  Once decals were dry the car body was sprayed with Model Master 4636 Flat Clear Acryl.  Trucks were painted with PollyScale Tarnished Black, F414140. 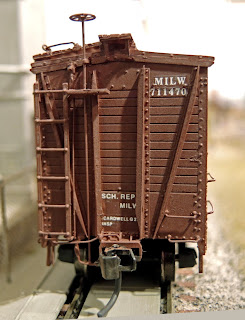 Building this kit provided me with many fun filled hours.  The fun continues when the card car is made to put Milwaukee box car, number 711470, in service on my Minneapolis & Northland Railroad Company, an operating railroad.  I wish to thank Frank Hodina who created the masters to make this kit possible.


Thank You for taking time to read my blog.  You can share a comment in the section below if you choose to do so.  Please share the blog link with other model railroaders.
Lester Breuer
Posted by Lester Breuer at May 31, 2018