In 2013 I purchased an Atchison, Topeka And Santa Fe, ATSF, CB&T Shops kit with a box label reading, “1944 AAR Box Car Limited Edition Set #1 produced exclusively for Div. 6, MCR , NMRA, Columbus, Ohio.”  The kit was purchased from an estate dealer at a local train show because the steel AAR box car, numbered 274525, had 6 panel sides on each side of the door.  I knew the Great Northern had this type car; however, I did not know if the Santa Fe did.  Recently I decided it was time to build and upgrade the car if it had a prototype.  Not having much reference data on the Santa Fe I asked if the car had a prototype and information regarding the car on RealSTMFC website.  I quickly received informative  responses with photos and data on the car.


The car had a prototype, Santa Fe class Bx-48, series 274000-274739, built by Pullman-Standard  in 1946 including the following features: 12 panel riveted steel sides, 4/4 corrugated rolling pin ends, Murphy panel roof, improved Youngstown doors with three panels, and American Steel Foundries ASF-A3 trucks.  The side panel near the ends on  the prototype car was larger than the other five panels whereas all the panels on the model were equal in size.  A discrepancy I could live with so the upgrade of the car began.

I began the kit build with the underbody which had molded brake components, levers, piping and brake rods.  I drilled and tapped the couplers pockets, pocket covers and bolster center plates for 2-56 screws.  Kit weights and electrical outlet box punch outs were used to weight the car to 3.8 ounces.  I installed Kadee #148 couplers with 3/16” Fastenal 2-56 screws and Kato, #31-601, ASF A-3 ride control trucks with Fastenal 2-56 1/4” screws.

I cut off the molded on brake components; however, I did not remove the brake levers, brake rods and chain (I do not have a underbody diagram to know if correct).  I used styrene round rod from the bits box to complete the missing portion of the molded on train line.  I drilled the removed air reservoir for piping and mounted it in a transverse position, common for the Santa Fe.  I replaced the brake cylinder, control valve and brackets with Tichy Train Group (Tichy), set #3013, parts drilled for piping prior to install.  I fabricated a Royal F slack adjuster as the car lettering next to the left side of the door reads the car has.


I added piping, Tichy # 1101, .010” diameter phosphor bronze wire (PBW), from the air reservoir to the control valve.  And, the pipe from the brake cylinder to the control valve, Tichy #1106, .0125” diameter PBW.  A resin cast dirt collector using Tichy dirt collector as a master from set #3013 was installed.  Finally, brake lever hangers, plastic grab irons in the parts drawer saved from some plastic kit, were installed.

I moved on with the build installing kit provided corrugated 3 panel 6 ft. doors.  Next, I installed the car ladders as I use them for positioning other added safety appliances on sides and ends.  I felt the ladder rungs were very oversize so I cut them off saving the stiles.  New ladder rungs bent from Tichy #1101 .010” diameter PBW were installed in holes drilled with a #79 drill.

Next I completed the install of the “B” end details.  A photo etched Morton brake step, Yarmouth Model Works, YMW #252, was installed with brackets cut from Evergreen # 8102, 1 x 2” strip styrene.  A Sunshine Models resin retainer valve from the parts box followed by a Tichy retainer line and brackets, Tichy #1100, .008” diameter PBW were installed. Tichy brake gear including chain and bell crank from set #3013 were installed.  A brake rod cut from Tichy #1102, .015” diameter PBW followed with the clevis connecting it to the bell crank made with MEK Goop. A Kadee #2020, Adjax brake wheel was installed.

Now I installed the grab irons: Kadee bracket grab iron on the left side and sill grab irons bent from Tichy #1101, .010” diameter PBW.  Another detail item to be installed was a resin placard board from the parts box mounted on mounting strips cut from .004” resin kit flash with fasteners made with MEK Goop added. 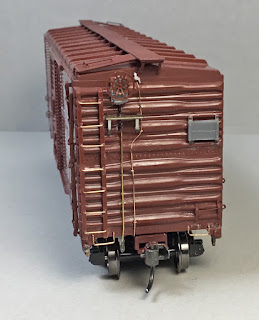 Finally, the uncoupling levers bent from Tichy #1106, .0125” PBW with a custom made bracket were installed.  The bracket was cut from Plastruct #90501, 3/64” styrene angle glued to the sill corner and after glue was set shaped with a PBL #803 Gate Nipper for despruing small plastic parts. A hole was drilled in the shaped bracket with a #80 drill for the bent uncoupling lever.

The CB&T Shops applied lettering on the car sides matched the prototype except for the missing "Royal F brake" next to the door.  I added it from an old Champ HB-20M Santa Fe "Super Chief" boxcar set.  All decals for the end lettering were needed.  Decals for ends, reporting marks and car number, were made with Clover House Railroad Roman Alphabet Condensed Bold White #9600-11 dry transfers applied to decal paper and coated with MicroScale Liquid Decal Film.  The type of "wheels" decal came from an old CNW Herald King decal set.  The decals were applied with MicroScale Micro Sol and Walthers Solvaset Decal Setting Solution.  When decals were dry, the car body was sprayed with Vallejo Matt Varnish 70.580 to protect new decals during handling and for weathering.

After the protective finish was dry I weathered the car body with brown Artmatic eye shadow makeup applied with a makeup brush on the sides and ends and Pan Pastels.  Pan Pastels used were the following: Paynes Grey Extra Dark 840.1 on the roof, underbody and very lightly on the car body and Red Iron Oxide Shade 380.3 on the trucks.  With the Pan Pastels applied another build finished enabling it to be put into service on the Minneapolis & Northland Railroad Company "Serving today, shaping tomorrow."


Thank You for taking time to read my blog.  You can share a comment in the section below if you choose to do so.  Please share the blog link with other model railroaders.