In 1917 the United States Railroad Administration (USRA) took over the nation's railroads.  To replace old outdated equipment and ease car shortages, the USRA developed three standard boxcar designs .  One of the designs was a 40 ton double-sheathed composite box car. Vertical tongue-and-groove wood sheathing, a flexible steel-sheathed wood roof, 5-5-5 Murphy corrugated steel ends, and a fish-belly center sill were some of the features of this design. Trucks for these cars were Andrews U-section cast-steel trucks with spring planks. The USRA ordered 25,000 of these double-sheathed cars to be allocated among the railroads.  The Chicago Rock Island and Pacific, CRI&P, accepted 1,000 of these 40 ton double-sheathed cars from the Mount Vernon Car Company and placed them in series 155000-155999.  The cars proved durable so the CRI&P rebuilt the double-sheathed cars in the 1950's keeping their original appearance except for the addition of a fascia board along the roof line and replacing the KC brakes with AB brakes. A complete history, details, and photos of these cars is found in Railway Prototype Cyclopedia, RP CYC 16, published by RPC CYC Publishing Company.

My build of this USRA rebuild 40 ton double-sheathed Rock Island box car, numbered 155945, series 155000-155999, is a Funaro & Camerlengo 40 ton double-sheathed box car, flat resin kit 3061. In addition to the kit instructions, I used data and photo, page 42, in RP CYC 16.  Being a flat resin kit, I began by building the basic car body "box." I make the "box" by gluing an end to a side to create a "L" and repeat the process for the other end and side.  The two "L" units are glued together to create the basic car body box ( for photos of using machinist blocks to keep assembly square  click on label machine blocks).  Next, the underbody was fitted via sanding to the box and cemented in place using the coupler pads for proper alignment to complete the car body without roof.  Inside the car body, corners were reinforced with Evergreen #164, .080"x.080" strip styrene.  And, a baffle made from Evergreen. 040" sheet styrene was added to prevent car body from bowing in. Now, I attached Kadee #262 narrow "whisker" coupler boxes with Kadee #148 "whisker" couplers installed with Zap CA glue to hold them for drilling.  I drilled the bolsters and coupler pockets for 2-56 screws and added the Accurail, #150, 2-56x3/16" screws to the coupler boxes. Next I added weights, electrical outlet box punch-outs, to bring the car weight to 3.8 ounces. Finally, Accurail Andrews trucks with InterMountain 33" metal wheels were installed with Atheran, #99002, 2-56x1/4" round head screws.

The roof was now glued to the car body to complete the basic car for final detailing. Detailing of the car body began with the roof to which I installed the longitudinal running board with Barge contact cement and Zap CA glue. Next, I installed the longitudinal extension brackets, made using Evergreen, #8102, 1x2" strip styrene, on both ends. I continued with the detailing of the "B" end. First the ladder stile was installed followed by the kit provided drop grab iron ladder rungs for which .080" holes had been drilled.  And, the same was done on the "A" end.  Back to the "B" end to install the kit provided brake step, Tichy Train Group (Tichy), set #3013. The brake step brackets were formed from ordinary wire staples found in your home stapler using the plastic kit brackets for a pattern.  A Sunshine Models resin retainer valve and retainer line, Tichy, #1100, .008" diameter phosphor bronze wire (PBW) with brackets, a "U" bolt shape bent from .010" diameter wire using a Xuron wire bending plier were installed. A vertical brake shaft step, A-Line #29000, and the vertical brake shaft made from Tichy #1102 .015" diameter PBW with a brake shaft bracket formed from Details Associates #2503 .010" diameter brass wire were installed next. A Tichy brake wheel from kit provided set #3013 was installed and a bolt head made with a MEK Goop (plastic melted in MEK) was added to the top of the brake shaft. Sill grab irons, bent from Tichy, #1106, .0125" dia. PBW and right side kit grab iron were installed. Now the kit placard board into which board and metal mounting strap detail was scribed using a scriber made from a dental tool was installed. Placard board fasteners were made with MEK Goop. Finally, the uncoupling levers fabricated from Tichy, #1106, .0125" dia. PBW with eyebolt brackets formed from Detail Associates, #2503, .010" dia. brass wire were installed. With the "B" end complete the grab irons and placard board were installed on the "A" end. 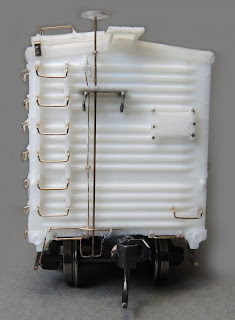 Now for the sides. The ladders consist of drop grab irons provided in the kit installed in #79 holes drilled below the molded on nut/bolt/washer castings.  Two drop grab irons are installed on the left side.  The sill steps in the kit did not match prototype photo so I replaced them with A-Line #29000, style A, sill steps. The molded on door handle was carved off and a door handle bent form Detail Associates #2503, .010" diameter brass wire was installed. One final detail item for a rebuilt Rock Island car is the addition of a fascia strip along the roof line.  After studying photo of this car I used an Evergreen, #8104, 1x4" strip styrene for the fascia board.

With car body detailing done, only the underbody was left to complete.  Bake components, Tichy #3013 brake set in kit, were drilled for piping and mounted on the left side (correct for the Rock Island) of the fishbelly center sill.  A Sunshine Models bracket was used to mount the brake cylinder. To install a train line, holes were drilled thru underframe members using a drill made from a four inch long, .032" diameter, piano wire.  A train line, .018" diameter flora wire in the kit, was installed.  Train line unions were added with MEK Goop. Brake levers made from, Evergreen, #8108, 1x8" and #8106, 1x6" strip styrene and a universal slack adjuster made form a .005" styrene was installed. Brake piping from the air reservoir to the control valve was installed using Detail Associates, #2503, .010" diameter brass wire and Tichy, #1106, .0125" diameter PBW  was used for the pipe from the brake cylinder to the control valve. All brake rodding is Tichy, #1106, .0125" diameter PBW with a half of a Tichy, #8021, turnbuckle for a clevis to attach it to the brake levers. Finally, a dirt collector, Tichy,# 3013 set, was installed.  The dirt collector pipe was connected to the train line with a tee made with MEK Goop. 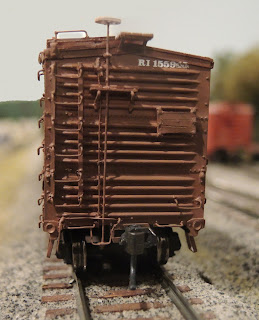 Rock Island 155945 now joins Rock Island 155939 in service on the Minneapolis & Northland Railroad Company.  When looking at the two cars sitting next to each other, the paint color is different.  Rock Island box car 155939 was painted in 2014 with Floquil Oxide Red, F110186, no longer available.  Rather than matching this color on Rock Island number 155945 with Vallejo paint, I decided to change the color to attempt a faded paint look.

Thank You for taking time to read my blog.  You can share a comment in the section below if you choose to do so.  Please share the blog link with other model railroaders.
Lester Breuer
Posted by Lester Breuer at July 05, 2018