Soo Line single-sheathed "sawtooth" box car, Speedwitch Media kit K108.2, is out of the M&N Shops where it received number 39826,series 39200-40198. The Speedwitch Media kit instruction sheet history portion states these cars closely followed the Canadian Pacific Fowler design; however, with some exceptions. The most distinctive feature of the cars was the method used to tie the crossbearers and body bolsters into the side structural members. The zee bar structural members extended below the side sill and tied into the ends of the crossbearers and bolsters.  This arrangement has been called the "sawtooth" single sheathed design by freight car researchers. The Soo Line Freight Equipment and Cabooses book by Ken J. Soroos, on page 11, states in 1923 500 cars of the subject car were built by American Car & Foundry.  These cars were the last of the 40 ft. single-sheathed cars built with five-foot doors and peaked roofs. The cars became the dominant visual standard for Soo Line box cars into the 1950's.


The kit has an excellent one piece body so no time is spent building the "box", that is assembling the ends, sides and roof. Therefore, you start by fitting the underbody into the car body.  The kit instructions are very complete and have good photos to guide you with the underbody work; however, I did make several changes.  I used Kadee #262 couplers boxes rather than the resin cast kit ones, brake levers were made from Evergreen #8108 1x8" and #8106 1x6" strip styrene, and flora wire, .019" diameter, was used for the train line.  A tee made available due to efforts of Tom Madden and Geroge Toman and printed by Shapeways was installed on the train line to hook up the Tichy Train Group (Tichy) , set #3013, dirt collector. In addition, Tichy, #8021, turnbuckles were used for clevises on the brake rodding and A-Line, #29219, black 40 links per inch was used. The Accurail Andrews trucks provided in the kit received InterMountain
33" metal wheels.


With underbody completed to my satisfaction, I turned to the "B" end details. Again the kit instructions have good photos to guide you when adding the details.  I added a bracket to the brake shaft and a two brackets to the retainer line on the "B" end.  I bent the uncoupling levers from Tichy, #1106, .0125" diameter phosphor bronze wire and installed them with the Detail Associates provided eyebolts for brackets. 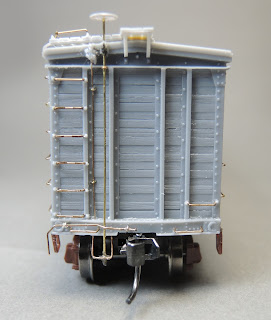 On the sides I made only a minor change. I carved off the cast door handles and replaced them with ones I bent from .010" diameter brass wire.

The Soo Line box car was now moved to the paint shop. Before paint application, I washed the car body with a makeup cotton swab dipped in 91% isopropyl alcohol to remove any final traces of mold release agent and build grime.  I next sprayed the underbody Vallejo Model Air Dark Grey Blue, 71.054 (tarnished black).  The color for the box car body was based on the paint color
mix of Zinc Chrome Primer with a touch of Red Oxide suggested in the kit instructions.  I used the suggested colors to create a paint mix of Polly Scale Zinc Chrome Primer, F414293, 50
drops and Model Master Oxide Red Flat, #4882, 10 drops, thinned with a custom thinner mix of distilled water, Vallejo air brush thinner and flow improver, to spray the car body. The paint
mix after applied to the car, in my opinion, is a nice match for colors photos of early Soo Line box cars in the Soo Line Equipment and Cabooses book by Ken Soroos.  Once the paint was dry
I sprayed the car body with Model Master, #4638, Gloss Clear Acryl for a decal base.  Kit decals, with design credit to Ken Soroos of the Soo Line Historical & Technical Society, were
applied using MicroScale Micro Set and Micro Sol.  Once dry the decals were cut through on board lines on the car body with a single-edged razor blade and recoated with MicroSclae Micro
Sol.  I like to cut the decals and recoat as it provides the model with the appearance that the lettering is really painted on the wood sides.  Again after the decals were dry the car body
was sprayed with Model Master, #4636, Flat Clear Acryl for decal and handling protection. No weathering yet as I like to give the paint several days to dry. 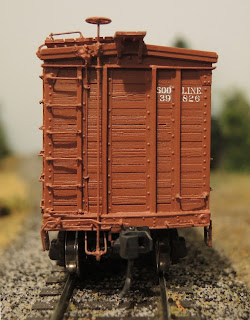 Soo Line single-sheathed "sawtooth" box car 39826 is now in service on the Minneapolis & Northland Railroad Company.  I soon hope to have it joined by a second car with the only exceptions being a small "WC" in the upper left corner on the side and a number in the series of these cars that went to the Wisconsin Central.

Thank You for taking time to read my blog.  You can share a comment in the section below if you choose to do so.  Please share the blog link with other model railroaders.
Lester Breuer
Posted by Lester Breuer at April 29, 2018